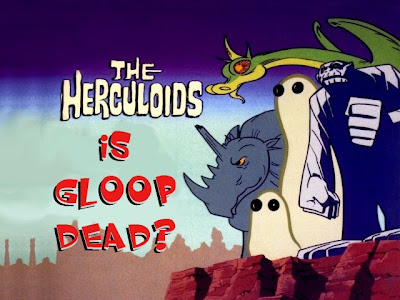 Recently, I had occasion to post a comment about the Herculoids on a friends comics blog. A few short hours after I posted my comment, I became aware that the actor who played Gloop on the popular TV show THE HERCULOIDS has been missing for several weeks. Gloop, who was born Gloopus Portnoy Hopfenglatzer in 1939, was last seen in a Cracker Barrel Restaurant mensroom in Paducah, Kentucky on March 24th, 2010. Here is a direct quote from the police statement of the witness who may be the last person to see Gloop alive: 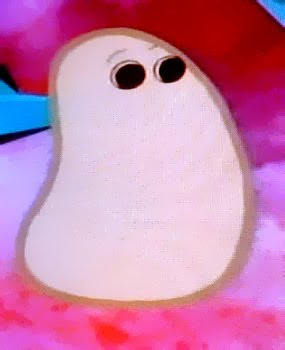 
"I almost didn't recognize him, he had stubble all over his...face? I guess that's what you'd call it, his face...anyway, I was in the stall finishing up my constitutional, when this guy busts into the restroom and starts pushing on the stall door! I yelled 'Occupied!', but the next thing I knew he kind of oozes under the stall door and pinned me againts the back of the stall. He smelled like Doritos and cheap vodka. I had to wait until he had finished his business, and eventually he left. It was like he didn't even see me or something. Later I was watching TV at home when I couldn't believe my eyes! "That's the guy I told you about, Snookums!" I yelled to my wife, who had been a big Herculoids fan as a kid. She said I should've gotten his autograph, but I didn't know it was him. Plus, he was a real a-hole, if you know what I mean." 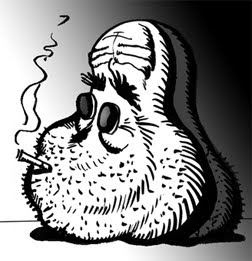 WHERE IS HE NOW?
Police artist sketch of how Gloop looked on the night
of March 24th, 2010, the last time he was seen alive.

In light of this shocking and perhaps tragic news, it is ironic how I had just been writing about him in that comment section.

~ Here is the gist of my original comment posted just yesterday:


Gleep Rocks, Gloop Sucks!
Herculoids is the top 5 superheroes of ALL TIME!! and number one is Gleep! He's ten times better than Gloop! Did you know that half of Gloops shots were done by Gleep? Did you know that almost ALL of Gloop's dangerous stunts were performed by Gleep? Remember the episode where Gloop surrounded the flame monster and snuffed out the fire? That was Gleep! Gleep recieved 3rd degree burns all over his plasm, yet he kept on working! Gloop spent half of his day in the trailer, drinking! Gloop sucks!

Now I feel kind of guilty bad-mouthing him that way, in light of his 'missing' status, but most if not all of my information for that comment was obtained directly from a recent book written by one of the stars of the show, who had worked side by side with Gloop for several seasons. Here is an excerpt, printed here with permission from the author.

The following is an excerpt from "Herculoids Unmasked" by former Herculoids star and toothpaste spokesperson Tarra, who played herself on TV's beloved HERCULOIDS television series. (please be advised some strong language is used, and some content may not be suitable for young children) 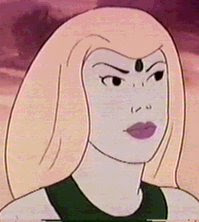 Tarra Van Tinkler (nee Foomphs), former actress on the TV series The Herculoids,
lately can be found late nights on HSN selling  Teefs-Blingz toothpaste.
She reveals some dark secrets about the beloved show
in her recent book, 'Herculoids Unmasked'.
______________________________
"It's been 40 plus years since we wrapped that show. I'm tired of keeping secrets. I'm just going to come out and say it. Zandor Cowznofski, the man who played Zandor, my husband on the show, was gay! Everyone on the set knew it, but we all kept the secret from leaking to the public. Just like everyone knew Gleep and Gloop were really brothers, and Gleep, who often appeared as the smaller of the two, was actually older than Gloop, who was a fat drunken pig. Gleep was wonderful to work with. He was always looking out for his younger brother, Gloop, and nearly every time Gloop had a difficult stunt to do, Gleep would have to substitute for him.  It was common knowledge that Gloop liked to party, on the set and off. Most days he would spend half the day in his trailer drinking, while Gleep risked his neck filming his brother's stunts." 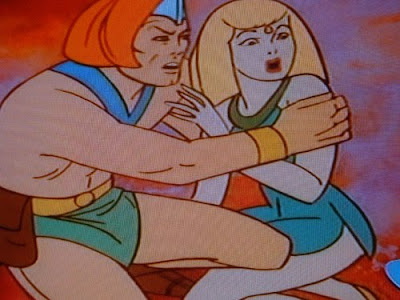 Onscreen passion between her and TV husband Zandor all fake,
says former TV actress. "That was the result of great acting and careful editing,"
reveals Tarra Van Tinkler, who played herself on popular TV program in the 60's. 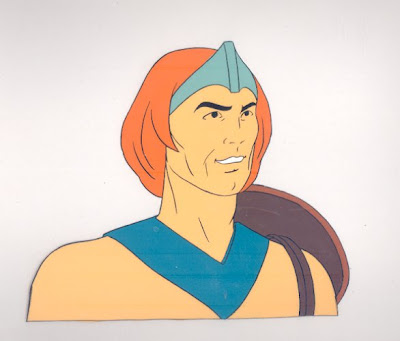 Unbenownst to all his fans, actor Zandor Cowznofski was reportedly gay, and extremely promiscuous,
according to several sources who worked on set for the series in the late 60's.
Cowznofski died in 1977 in a widely publicized and tragic
ice-fishing/auto-erotic asphyxiation related electrical mishap. 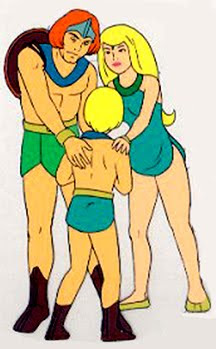 According to  TV spokesperson Tarra Van Tinkler,
things were not all 'quiet on the set' of The Herculoids.
(Above, an early publicity photo featuring the soon to be replaced ill-fated 'first' Dorno.)
"I remember in particular one day we were filming a scene with myself, Igoo, Zok, and Gleep filling in for Gloop, as well as doing his own scenes. We had finished the main shot, and they were ready to double a shot of Gleep as himself, so Igoo and I went back to our trailers. On the way we heard something strange coming from Zandor's trailer. It was Gloop, drunk as a skunk and naked, wrapped around Zandor like a fur coat, who was also naked. It was disgusting! I should have confronted them  about it, but Igoo convinced me to keep quiet and pretend we didn't see anything. I wish I had said something to the producers, but I kept my mouth shut. Igoo had 13 children and 3 wives to support, so he didn't want anything to ruin the shows chances for renewal." 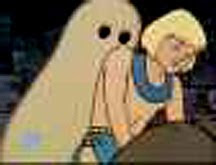 "Then there was the time we filmed a scene with the young boy who played my son, Dorno. Gloop was supposed to come over and put his 'arm' around Dorno, but instead he came up behind Dorno and grabbed his butt. Right in front of everyone, he was so smashed he didn't care. We had to get a new Dorno, the kid refused to come back on the set. That was when the director demanded that Gleep replace Gloop in all his shots that could be faked. There were even shots where our special effects artist Henry Smooch was able to create the effect where Gleep and Gloop were in the same shot, but they were both actually Gleep!  Smooch and Gleep actually became quite close because of that, and the last time I saw Henry he told me he had just come back from a deep sea fishing trip with Gleep and Tundro, who was in the states promoting his line of edible mailboxes. Tundro lives in France, and in fact if you listen closely on the old episodes you can detect his French accent! He was actually raised there. Tundro knew somebody well-connected in the casting office. I can't say we were ever close, but all those scenes where I looked real concerned for Tundro? That was just great acting by me! I admit it!" 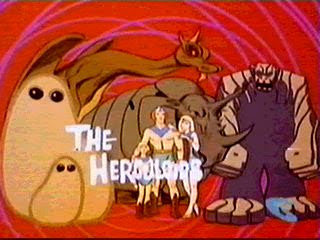 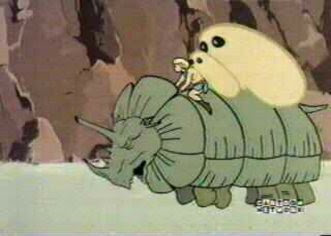 Is that Gleep and Gloop riding Tundro?
Nope, that's the special effects wizardry of Henry Smooch at work,
mixing two seperate shots of Gleep to look like Gloop and Gleep!

"I remember a scene where Gleep. standing in for Gloop, was supposed to smother some flame monster or something, and he actually got hurt pretty bad. The man who played the flame monster was actually suffocated when Gleep surrounded him, Gleep was so dedicated to getting the shot...sniff...excuse me... this brings back old memories...sniff...anyway, The director yells 'Action', Gleep leaps, spreads out like a parachute and surrounds this guy, who was just some extra they doused with gasoline and lit on fire, and Gleep wanted to make it look good, so he got so close that when he smothered the flames, he smothered the man, and received 3rd degree burns all over his protoplasm. I couldn't believe it! The director actually used that scene in the episode, you'd think they would have some respect, but no, they actually used it. Gleep acted like it was all part of the job, and he even came in the next day to dub lines! He was a real trooper! We all loved him! All the while Gleep was on set getting burned, Gloop was in his trailer shooting heroin. When he found out what happened to Gleep, all he said was, "Wuwuwuwuwuwuwooo!" Can you believe that? That's all he ever said, in fact... he was effectually illiterate and had therefore some deep rooted hatred for the written word.   One episode he was supposed to deliver a simple soliloquy from Macbeth, a few lines, to end the episode. Instead he let's loose with a loud "Wuwuwuwuwuwuwuoooo!" I could smell gin on his breath from across the set! There was no love lost between us, let me tell you!"


~ Many more juicy behind the scenes details can be found in the recent book  Herculoids Unmasked, published by Obvious Parody Books and Completely Fake Publishers Co. Inc. 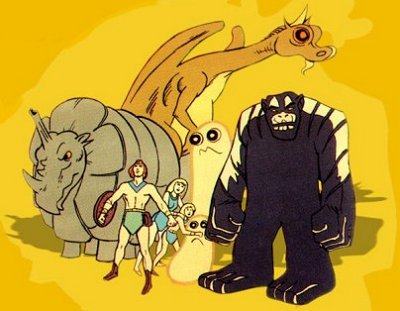 Herculoids publicity still, circa 1967  -  from left to right (front):
Tundro, Zandor, Tarra, Dorno,Gleep, Gloop, Igoo, and Zok (rear).
Rumors confirmed: was there infighting and debauchery behind the scenes?
Yes, according to the former actress Tarra Van Tinkler, who at the time went by
her maiden name,Tarra Foomphs. "Zandor was gay and in heat, Tundro barely spoke English,
Gloop was a dirty drunk, and Igoo was all touchy-feely with everyone,
which didn't go down well with most of the cast, except Zandor" says Van Tinkler.
"Zok was always leaving his droppings all over the soundstage,
and outside the trailers was filthy from it. The only cast member
I remember fondly was Verm (Gleep), who bought me special
chocolate eggnog malted milk-shakes at the local Rexall store."

This was an excerpt from the book, "Herculoids Unmasked", by former TV star, Tarra Foomphs, who played herself on the popular series. For a revealing and shocking read, pick up a copy at your local fictictious bookstore. (currently out of print) 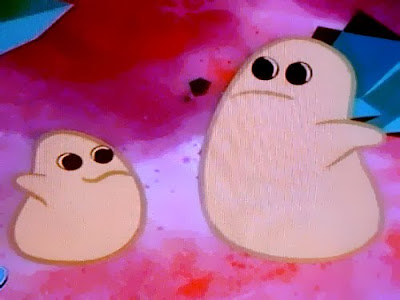 We will continue to monitor the situation and update you here with any
new reports regarding the welfare of TV's Gloop.
Police have asked all concerned parties,
"Please do not harrass the Hopfenglatzer family or throw jelly beans in support."
____________________________
For readers unfamiliar with The Herculoids, here is an episode
presented in a foreign language to make things clearer.
Posted by THE APOCOLYTE at 10:52 AM 10 comments: Links to this post

BLACK CONDOR As Done By STERANKO 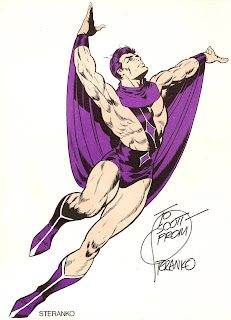 Rummaging through my millions of scans and comic art files, looking for the next Bad Costume Battle, I stumbled across this forgotten (by me, anyway) image of The BLACK CONDOR, as depicted by the amazing Steranko. Mr. Steranko, one of my all-time favorite artists, managed to transform the lithe, effeminate looking drag-queen we saw on the Golden Age covers in earlier posts into a rugged, muscular and downright handsome heroic figure! If the original Black Condor had looked this good, I wouldn't have lambasted him so! Well, his costume was rather silly, wasn't it?
Stay tuned, folks!
Posted by THE APOCOLYTE at 5:23 AM 11 comments: Links to this post