THE SIMPLE TRUTH ABOUT LYNCHING, AND THE LATEST FAUX OUTRAGE BY DEMOCRATS

"LYNCHING" THE LATEST 'TRIGGER' WORD BEING OVER-DRAMATICALLY TARGETED BY LEFT

All this faux outrage by the Left and their MSM propaganda advocates over the word "lynching" is both ridiculous and expected at this point.

They are triggered by everything, and if they aren't actually offended, they pretend that they are in order to manipulate the masses. Basically, if they can blame Trump for ANYTHING, they will. No surprise. It's a tactic.

Here's some facts about 'lynching'. While there can be connotations to racism, the act of lynching has not exclusively been tied to racism throughout history. Historically, in the USA, lynchings occurred in 44 states, and out of those 44, 23 states lynched more white people than black people. That's 52% of lynchings being perpetrated on white people.

Most of those lynched were accused of murder or attempted murder, or rape/attempted rape. They were hung by lawless, violent mobs who forsook legal recourse, and executed the victim without trial or appeal, based upon little more than hearsay and mob mentality.

The fact is that President Trump used the term metaphorically, clearly, and not literally. His usage is fairly apt considering the relentless efforts to destroy the man by the opposition party. The facts also reveal that the word has been used repeatedly by mostly white politicians for decades in recent times, including chief rival Joe Biden.

Let's get a grip. Stop the ridiculous outrage. If a word "triggers" you, perhaps you need to go through life with earplugs permanently embedded.

And get your facts straight. 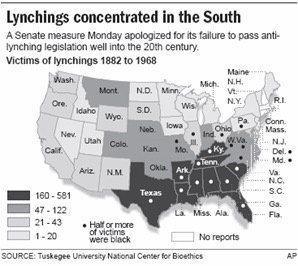 Posted by THE APOCOLYTE at 7:53 PM No comments: