THE TRUTH ABOUT BARACK OBAMA 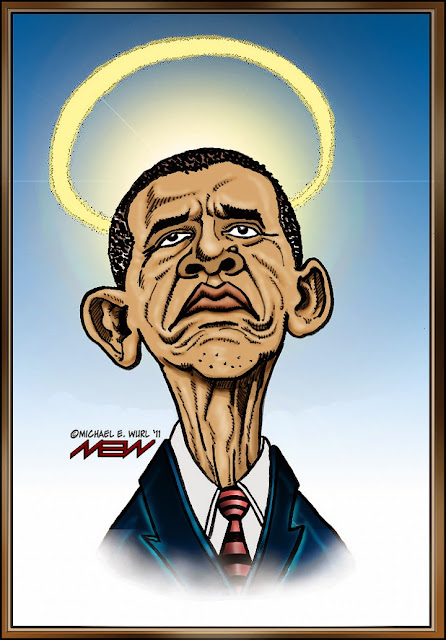 Our glorious leader floats high above the mediocre populace and as his wondrous head breaks through the top of the clouds, his rapidly tarnishing halo magically appears and a chorus of angels begin to sing, held aloft by baling wire and duct tape. So bow down and shut up, and realize he knows better than you what you need. One day you may understand, but probably not. We're just not as smart as him, and we never will be, but it's okay, he's resigned himself to that fact. Now get in step!

I've been putting color to many earlier black and white works.
One of them is this satirical political portrait of President Barack Obama.
Entitled "SAINT OBAMA", it pictures our current President, a unique individual who apparently never does anything wrong, is smarter than most of us poor yokels, and even though he seems to be surrounded by incompetence, anything that ever goes wrong is never his responsibility. Don't ever criticize him or his policies, or you may be labeled as a racist in the next wave of administration propaganda. 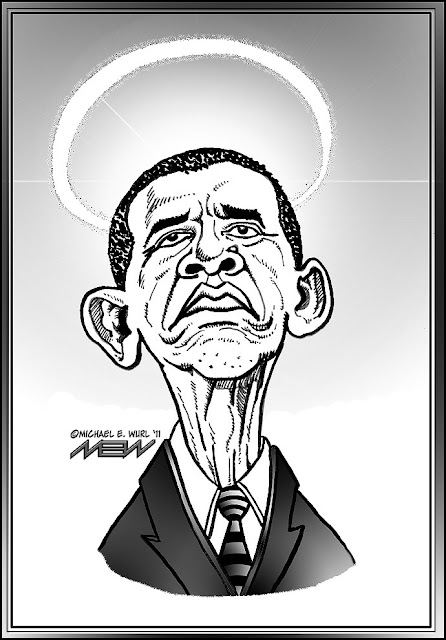 Barack Obama emerged from my home state of Illinois, where we continually churn out corrupt and weaselly politicians the way Iowa produces corn or Idaho does potatoes. I watched with increasing consternation his ascendency from a lazy do-nothing Senator to a double-talking do-nothing candidate to a terrible do-nothing President.

I feel he is a one-trick pony of sorts, his 'trick' being an adept and capable speaker who can articulate with superiority in a field where currently as well as recently this has not necessarily been the case. Indeed, when as a fledgling Senatorial candidate (I repeat, a mere candidate) who had distinguished himself in no way whatsoever was for some reason given the opportunity to deliver the keynote speech at the 2004 Democratic convention, the Democratic party commenced to drool all over itself in fawning adulation at this light skinned African-American who was able to project himself as thoughtful, articulate, and authoritative in a manner that was lacking in the party previously, and in public politics in general. They then took this unknown and untested candidate and thrust him forward as America's savior, where much of America (and the world) embraced him as a stark contrast to the tongue-tripping oil-allied dynastic false-flag manipulator who was Bush II.

I sense that Obama's main negative attribute (he has several) is his apparent belief in his own advertising hype as some sort of savior-god who is now entitled to lead us all by the hand into the realms of his vision for an Obaman society. Clearly he has alluded to the notion that most Americans who disagree with his vision are obviously too stupid to understand how wonderful his intentions are, and therefore he will not budge one iota from his predetermined goals, no matter how often the voters or constantly disparaged groups such as the Tea Party rightfully voice their opinions to the absolute contrary.

In his extremely abbreviated term as Senator he mostly abstained from making any decisions on the issues by voting "present", and as President he has followed this pattern, weighing his words and actions with such a meticulous fine-toothed comb so as to not offend any potential voter or ally to the point where he doesn't make any decision at all, and when he absolutely has to he does it with a pandering ethereal vagueness so as to obfuscate any detrimental perceptions.

I would rather have a leader who leads, who takes actions swiftly when needed and expresses themselves honestly to the people, than this arrogant and self-absorbed swaggering megalomaniac. While it can be argued that some of his intentions may be noble, the fact is that the path he is leading America down is not the road to prosperity but rather a dark and dead-end alley where vultures hover overhead and wait to feast upon our blind and lost carcasses.

I disagree with his vision (or at least the path he chooses to inaugurate said vision) so vehemently, I would instantly cast my vote for a faith-based constitutionalist idealist such as Sarah Palin, despite her lack of political and global gravitas and in spite of her media defining "deer in the headlights" faux pas in her Couric interview; or perhaps I would even vote for a power-mongering capitalist elitist such as Donald Trump, whose thinly veiled intentions are clearly business motivated and whose experiences are clearly out of touch with 98% of the voting public, and whose gruff and condescending attitude make LBJ look like a Care-Bear. At least they speak plainly and are what they appear to be, and they are not the calculating and pompous two-faced fence-sitter we currently have in office.

_________________
(Today's post was taken from a previous opinion I had made in the comment section when I suddenly realized that I often give more thought and insight in my comments than in my actual posts. Considering then not everyone reads the comments, and not wanting to waste a good op/ed opportunity, this is my attempt to change that pattern.) 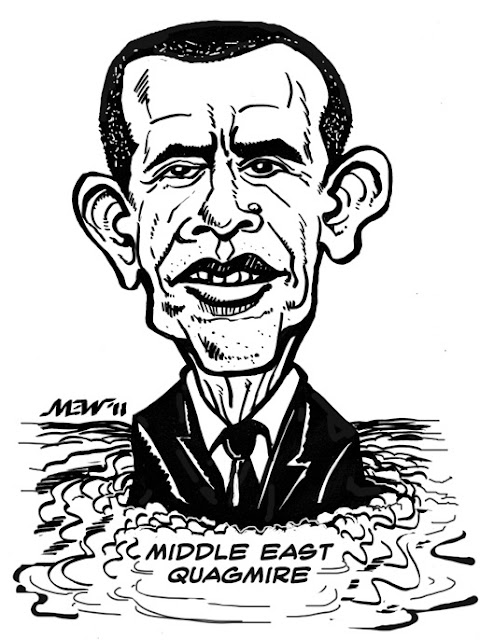 ...You can only see Obama's face because he's actually standing on Qaddafi's head...﻿
...nothing to see here, folks...just a quick war with no clear objectives...just in and then out...eventually...
Posted by THE APOCOLYTE at 7:03 AM 6 comments: