NAMOR THE SUB-MARINER AIN'T NO SQUARE 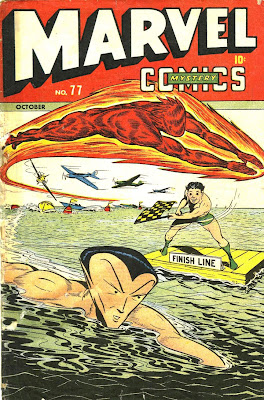 He's kinda more of a triangle.

Can somebody tell me what's going on in this cover here?

I don't mean the race between the speed-boats and the planes and the Human Torch and Namor...

WTF is going on with Subby's HEAD??!!

Syd Shores is credited with this cover.

The same Syd Shores who drew Captain America for years (and better than Kirby).

Just look at the nice detail he is able to give the waves splashing against the raft.

It almost looks like Stan Lee said to Syd Shores, "Syd, those covers you've been doing for Cap and Subby lately are great, but you gotta remember that Namor's head is kind of a triangle shape...try to give it a bit of a triangle shape next time, okay?"

And then Syd said to himself, "I'll give you a triangle head...YOU WANT A TRIANGLE HEAD??!! Your gonna GET one!!"