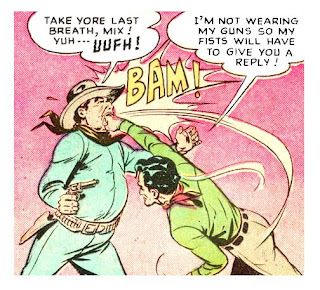 Tom Mix was the world's first cowboy star. He made over 300 movies, and out of those only 8 were 'talkies'.  In fact, by the time these excellent comics by Fawcett appeared, Mix had been dead for going on 8 years. The world's greatest cowboy, who left movies in 1935 due to injuries, had been contemplating a return to film. Unfortunately, this never happened. On October 12th, 1940, Mix was returning home from Tuscon on Arizona state route 79 when, upon suddenly finding the road blocked by construction barricades due to a flash flood, veered his 1937 Cord 812 Phaeton into a ditch. Upon impact,  the large aluminum suitcase filled with silver dollars that was on the seat behind him flew into the back of his head, crushing his skull and breaking his neck, killing Mix instantly. 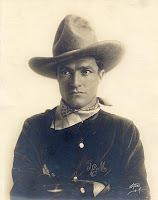 You wouldn't know he was dead in these great comics published by Fawcett. I guess kids didn't care if he was dead, they bought the comics anyway.

When I first saw one of these comics I didn't know what to expect, but I found myself wanting more of them as soon as I had started reading. Most of these TOM MIX WESTERN comics had sweet painted covers, by Saunders and others. But I fell in love with the art and stories inside! Unfortunately, artists didn't get to sign their names and/or get credit very often for some of the fantastic work they did and it took a while to find out who the artist was. It was, in fact, two artists. 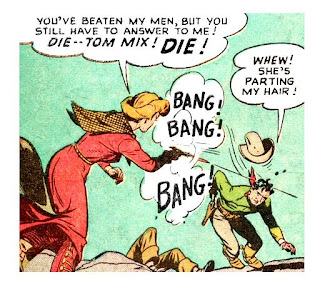 Let me make you aware of one of the greatest pencil/inking teams in the history of American comics, Carl Pfeufer and John Jordan. I know you probably never heard of them, not many people have. Like a Kirby/Sinnott, or Colan/Palmer, this combination worked wonders for Fawcett comics and more back in the 40's and 50's. The amazing thing was, the combination of their talents resulted in a much better product than any of their work seperate from each other, I believe. Pfeufer was a classically trained artist, and his quickly drawn figures flow and move with anatomically perfect precision, though his own finished style is a bit loose and 'hurried' looking. Jordan's style is very stiff, his figures look 2 dimensional and unreal, yet his art is finished very tight and neat. Put them together and you get some of the most beautiful western comics ever produced. I have a lot more to say about these two, and more scans to share, but here is the start. Enjoy.

These scans come from my own comic collection. This is actually one of the roughest copies of TOM MIX in my collection. Apparently, this particular comic used to belong to Wilson Marshall. If you are out there, Wilson,  --  it's mine now! But please feel free to enjoy the scans! 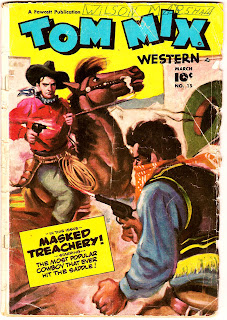 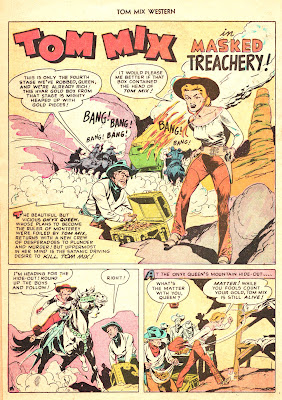 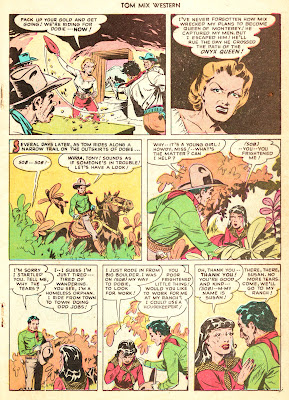 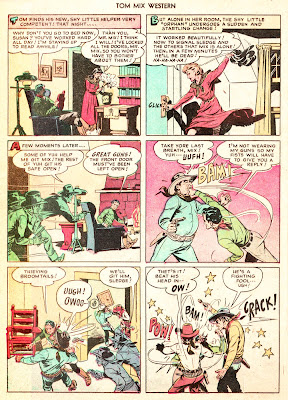 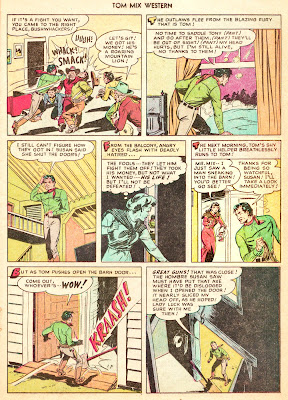 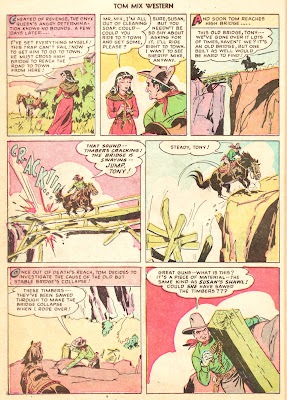 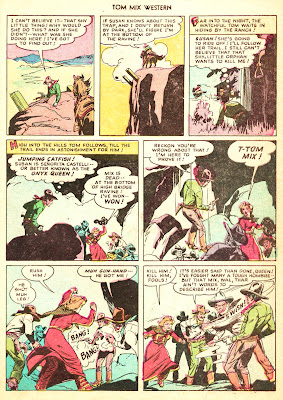 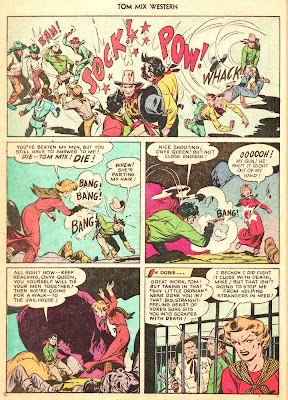 They sure did like to dress up and pretend to be other people alot back then. Don't believe me? Well, take a look at our next story! 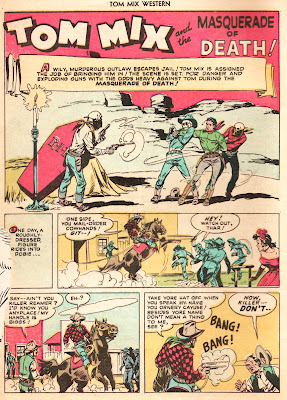 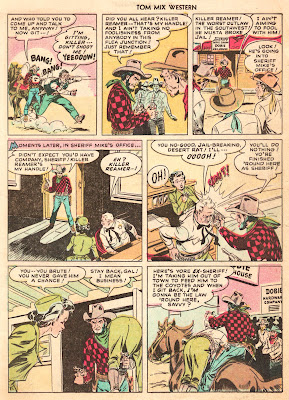 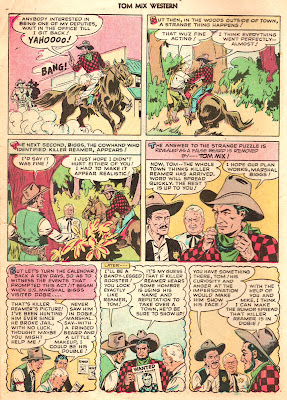 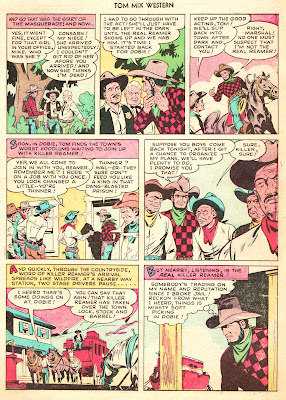 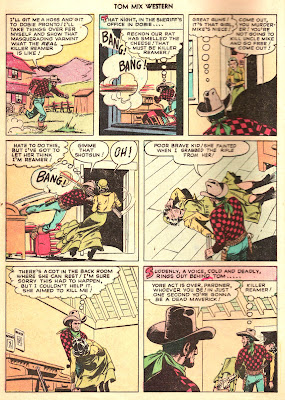 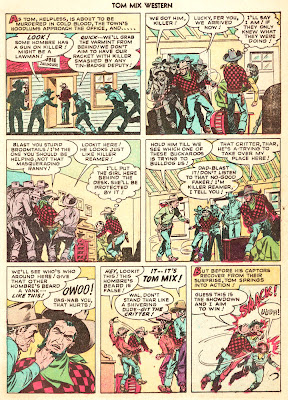 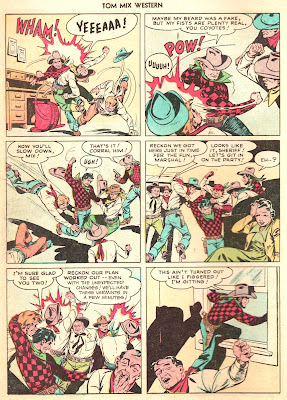 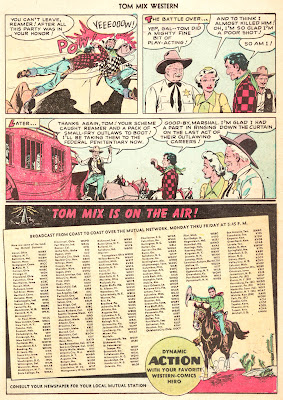 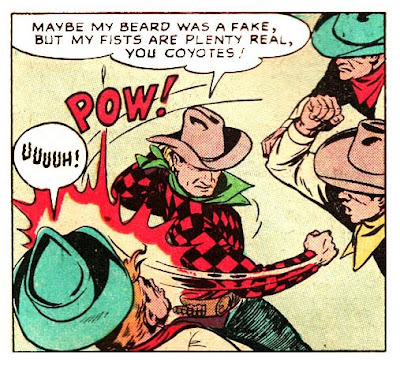